There’ something magical about ice cream that catapults us straight back to the long, lazy summer afternoons of childhood when all that any of us had to worry about was which flavors we were going to mash together in a Sundae on our next visit to the local parlor.

It’s an instantaneous and delicious form of time travel whose sweet, sugary embrace we willingly submitted to decades ago.

Ice cream has made our world turn for longer than we care to remember and we’re not afraid to admit that we’ve dedicated our lives to pursuing it and all of its delicious facets.

And one of the best things about growing up is discovering that you don’t have to go to the parlor, wait for the ice cream man to show up, or head down to the supermarket and be disappointed by their uninspiring choice of flavors to get a taste of the heavenly treat that we all crave, you can make it yourself. At home.

We decided that, no matter how long it took us, we would find the perfect ice cream maker, a machine that would help us to finally bring to life all of the weird and wonderful ice cream concoctions and flavors that we’ve been fantasizing about for years.

And it’s that endeavor, the one that we’ve wholeheartedly devoted our lives to that finally made us focus our beady little eyes and sprinkle filled gaze on White Mountain’s Electric Ice Cream Maker.

Who Is White Mountain?

We’re more than a little ashamed to admit that we hadn’t actually heard of White Mountain until this incredible ice cream maker dropped into our laps, especially given their long-established pedigree in the manufacture of our favorite food group.

Don’t argue, it’s true, ice cream is a food group and we’ll defend its right to identify and be identified, as such with every last breath in bodies.

White Mountain, much like us, have always been about making sweet memories from home. They’ve just been doing it a lot longer and with a lot more success than we have.

Founded in eighteen fifty-three, they started their mission with the same hand-cranked machine that their prime mover Thomas Sands grandmother used to make the ice cream he adored when he was a boy.

It’s a great emotive story, but how much of it is hyperbole and how much is fact is known only by the winds of history, but we like it a lot, so we chose to believe that it’s one hundred percent true.

Built on heritage and tradition, White Mountain finally committed to the age of electricity in nineteen fifty-three when they patented and manufactured their first electric ice cream maker and began to make their presence felt in the world outside of their New England home.

Sticking rigidly to the belief that if something isn’t broken, there’s no need to fix it, their ice cream maker hasn’t changed much in the last seventy years.

It’s a little more refined and focused and neater around the edges than it used to, but at its heart, it’s the same ice cream maker that it’s always been.

Because heritage and tradition are important, and they’re fundamental to the way that White Mountain has always done what it does best. Helping everyone to make delicious ice cream. 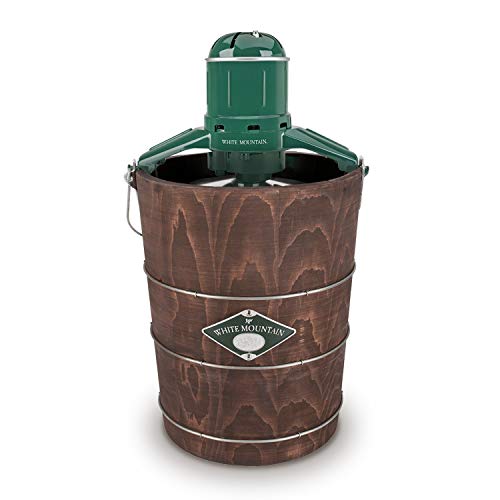 When we finally unboxed and unpackaged White Mountain’s Flagship appliance, we were a little taken aback.

It’s beautiful to behold, and the actual ice cream maker, the motor, and the stainless steel canister that the ice cream, is churned in, sit in a nineteenth-century style New England bucket, which shows how determined the company is to cling to their roots and how important their history is to them.

And for ice cream fanatics like us, the snapshot of the past that it provided was enough to fuel a week’s worth of dreams about the way all things ice cream used to be.

It’s an easy machine to set up too, and the instructions for assembly and operation couldn’t be simpler. ​

It even comes with its own recipe book and being the adventurous ice cream souls that we are, we thought that the best way to christen our White Mountain Ice Cream Maker was by churning out a batch of White Mountain’s own vanilla ice cream.

So we prepared our mix and started to whip our vanilla ice cream, the traditional White Mountain way.

The steel canister sits in the middle of the bucket, and the gap that surrounds it in the bucket needs to be packed with alternating layers of ice and rock-salt (which lowers the melting temperature of the ice and thus allows the ice cream in the steel canister to thicken more quickly), which holds the canister in place, and as soon as you’ve locked the dasher in the canister, you add your ice cream solution and fasten the lid in place.

The motor then needs to be attached to the bucket and the dasher, which again is simplicity itself, and is done with a few simple twists.

Then you just plug it in and the motor and dasher combination gets on with doing the important stuff; making ice cream.

It’s an impressive set-up, and even though the motor is slightly louder than we’re used to, it’s also a lot more powerful and can hit up to twelve thousand RPM, which means that when it’s teamed up with the White Mountains patented triple dasher, the time it takes to make your ice cream is greatly reduced, and instead of the usual sixty to ninety minutes that we expecting it to take, we found ourselves with six quarts (if six quarts is too much, don’t worry White Mountain also makes a Four Quart version of their ice cream maker) of ready to eat straight from the canister and bucket ice cream in around forty minutes.

That isn’t just quick, it’s the Flash racing to save Central City from the evil machinations of Brainiac fast.

Oh, and the ice cream that the White Mountain recipe and ice cream maker helped us to make? It was superb.

It Isn’t All Sprinkles And Hot Fudge Sauce

While we’re suckers for tradition, there were a couple of things that we didn’t float our Sundae boat as much as we hoped they would when we put our ice cream making fate in White Mountain’s hands.

The main issue that we had was having to continually fill the gap between the edge of the bucket and the canister with ice and rock-salt, as even though it speeds up the thickening process, the rapidity with which the rock-salt and ice mix melts is frightening.

Automation was supposed to make life easier, but we guess that because White Mountain likes to do things the old fashioned way, they assume that everyone else does too.

While it was fun at first, we can envision the need to keep fueling the maker with ice and rock-salt becoming increasingly frustrating over time, especially if you try to involve your children, or if they want to become involved, in the ice cream making process.

Then there’s the motor, which as we’ve already mentioned is incredibly loud, and if it wasn’t for the five-year White Mountain guarantee, we’d have been worried about it burning out or shaking the ice cream maker to bits, but we guess it’s just supposed to be that loud.

Don’t get us wrong, we love American muscle as much as the next gearhead and worship at the altar of the Hemi every Sunday afternoon, but even for folks like us who are used to the unchained roar and lazy burble of a small block V8, the motor that White Mountain uses to power this ice cream maker is loud. And when you plug it into the mains, it takes off like a rocket.

Reaching For The Sugar High – Our White Mountain Verdict

This ice cream maker with one foot in the past and the other firmly rooted in tomorrow doesn’t just look good, it whips up the sort of soft sugary concoctions that we grew up thinking about day in and day out.

The ice cream that it makes is absolutely delicious, and thanks to the White Mountain recipe book, we’ve now got a freezer full of different flavors to savor and try whenever the mood takes us.

Is it the perfect ice cream maker that we’ve been searching for?

Unfortunately, it isn’t, as even though it came pretty close to taking the ice cream trophy, the fact that we had to keep adding ice and rock salt and the volume of the motor meant that it was never going to achieve that ultimate sugar high.

That said, it did smash its way into our all-time ice cream making top five, which all things considered, is a pretty good place to be. You could do a lot worse than entrust your ice cream future to White Mountain.